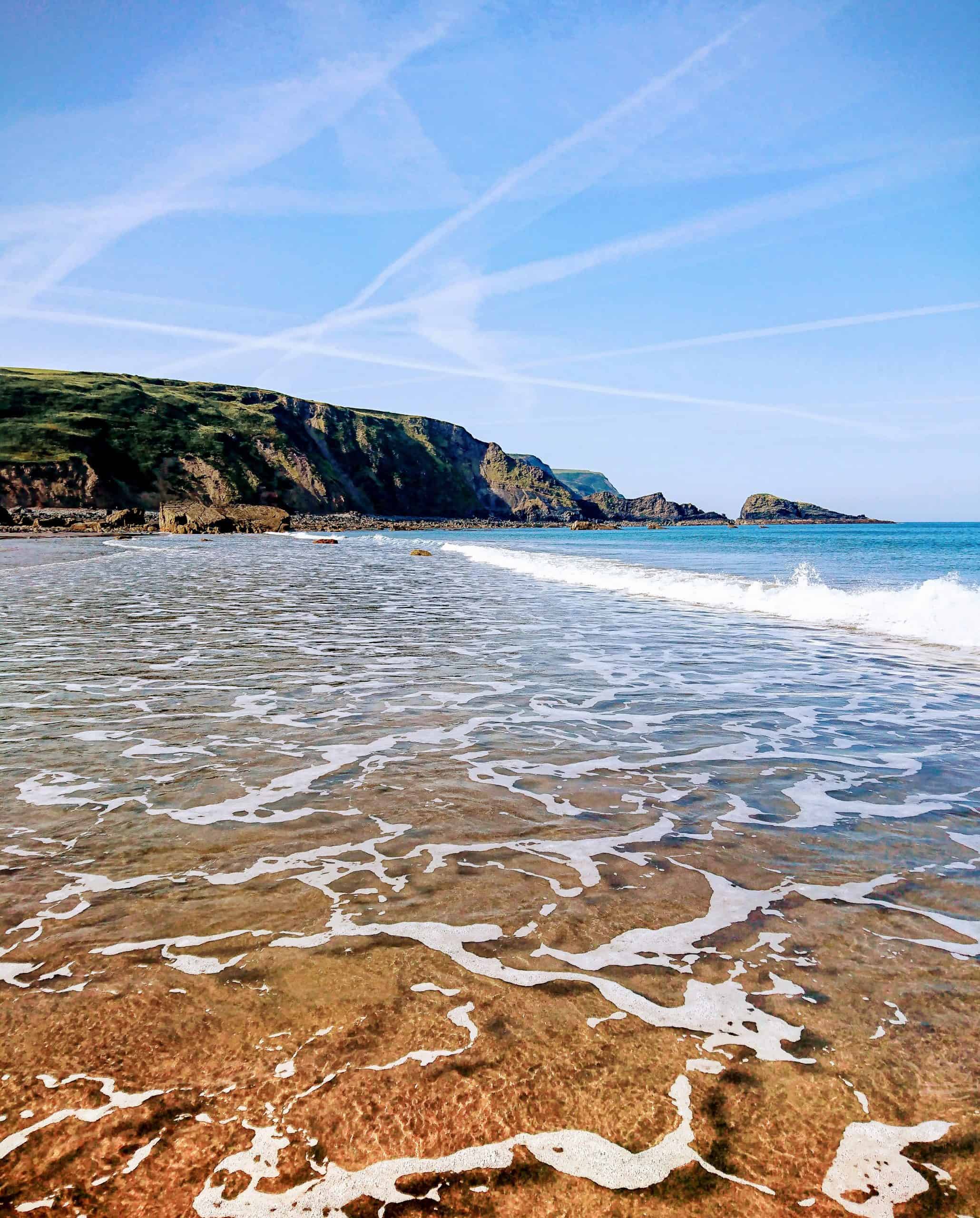 A 15 – 20 minute walk from Mead Barn Cottages will deliver you to this most stunning beach with its cliffs, caves, waterfall, rock pools, sand and surf, and astounding views out over the Atlantic. The beach is raw, secluded and dramatic no matter what the weather or season. This ‘Iron Coast’ as it was known in days of yore, is believed to have claimed over 200 vessels in its maritime history. Maggie, Cornelia, Nancy, Leopoldin Baur, Edward Beck and Avonmore are names of some of the historic ships that have been wrecked by the treacherous razor-backed reefs that line this formidable stretch of shoreline. The beach is dog-friendly all year round and is an ideal spot from which to pick up the South West coast path North to Hartland and beyond or South through Morwenstow to Bude. 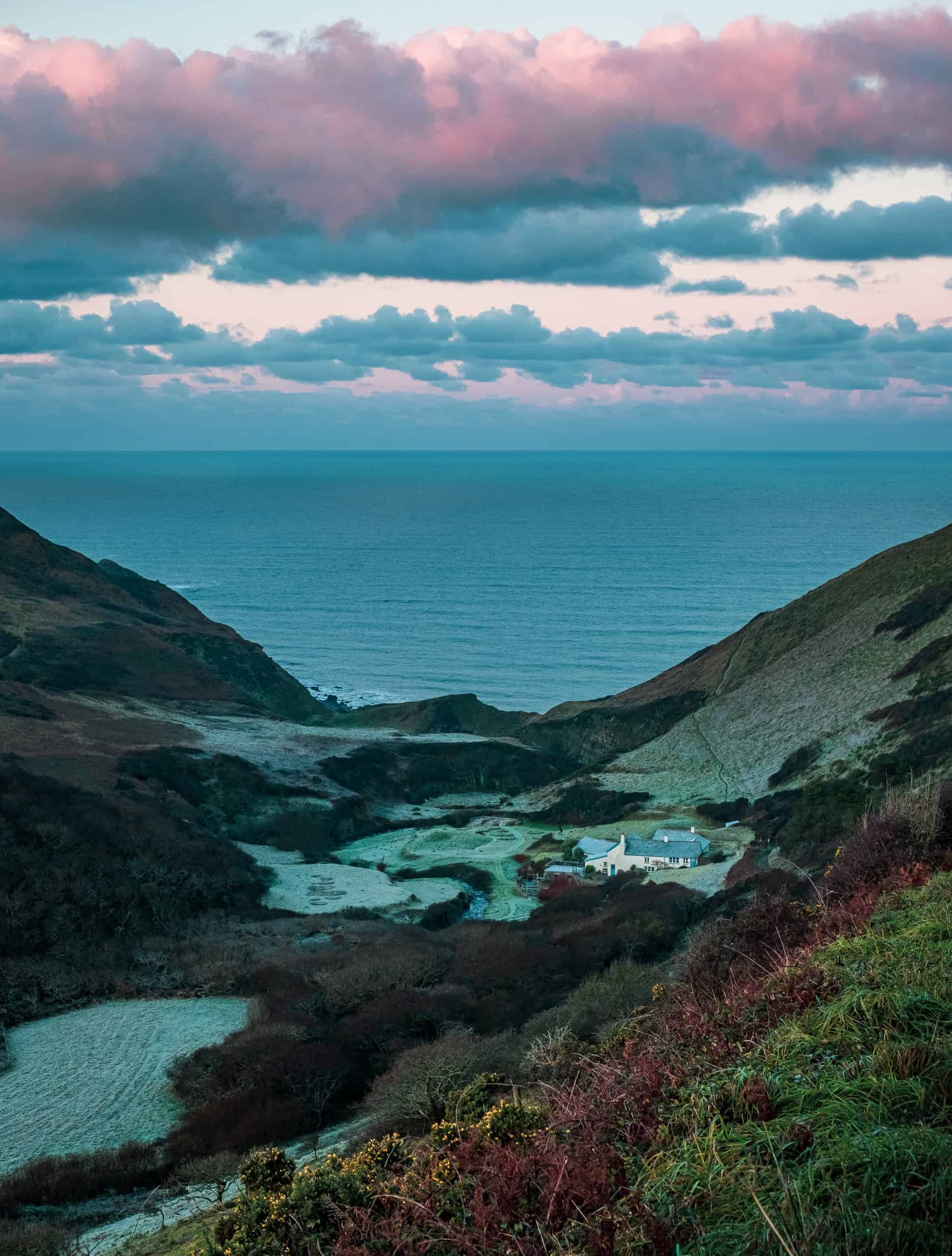 Marsland Nature Reserve, located directly adjacent to Mead Barn Cottages, is an ancient and remote area of woods and heathland that is home to a variety of uncommon and rare wildlife, including dormice and otters! There are also over 320 species of flowering plants, 34 different types of butterflies, 160 beetles, 18 dragonflies, over 500 moth species, 51 hoverflies, 9 bats and 115 birds. The reserve was secured in the 1950’s by the benevolent chocolatier Mr Christopher Cadbury and remains a designated Area of Outstanding Natural Beauty and a Site of Special Scientific Interest. A stroll through these woods, or alternatively down a steep lane past a 13th Century former Mill, and you will come to Marsland Mouth. A cove even more remote than our neighbouring Welcombe Mouth. 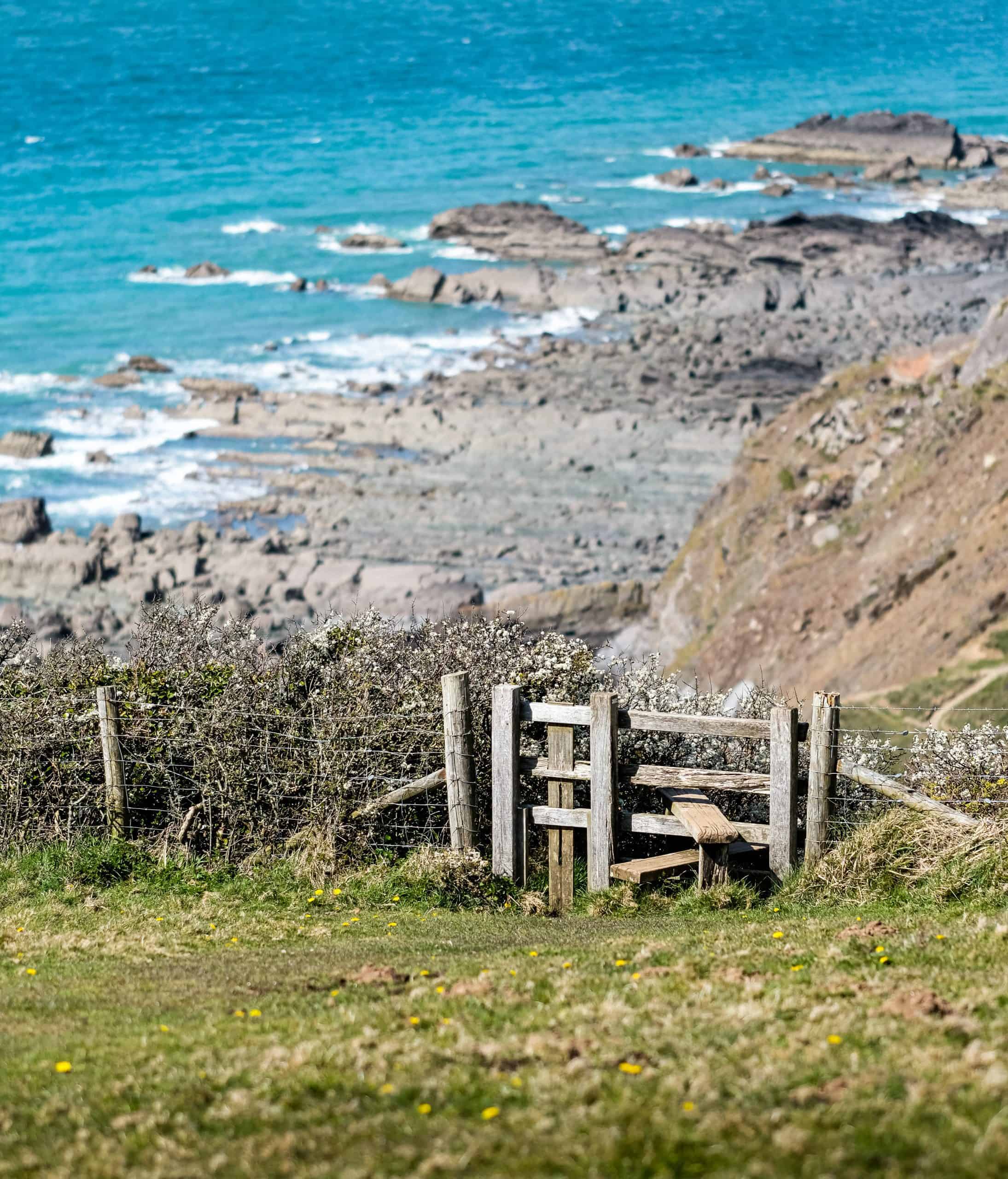 A 10-minute walk from our doors down a public footpath across pleasant farming land and you will meet the South West Coast Path. This stretch of the Path both North and South is regarded to be the most demanding (just shy of 160m above sea level at our nearest point) and dramatic section of the whole 630 mile national trail. 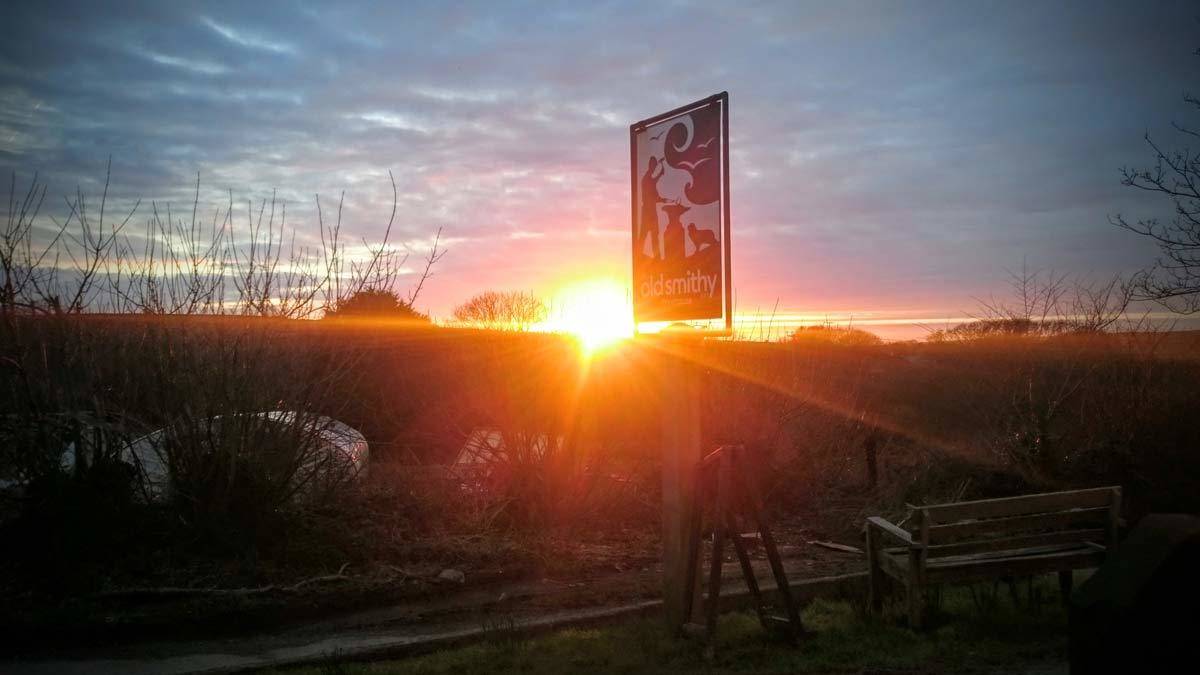 Our local pub, which is terrific, is a 17th Century, thatched former Blacksmith’s Cottage situated in unspoilt farming countryside and less than a mile on a public footpath from the cottages. The pub is dog friendly, serves good, hearty fare and always has a great selection of real ales and local ciders, (even hosting its own beer and cider festival in the summer). In summertime, the ample beer garden has views across green fields to the Ocean, and in winter there’s always a roaring fire and friendly conversation to be had.

Bude and its beaches 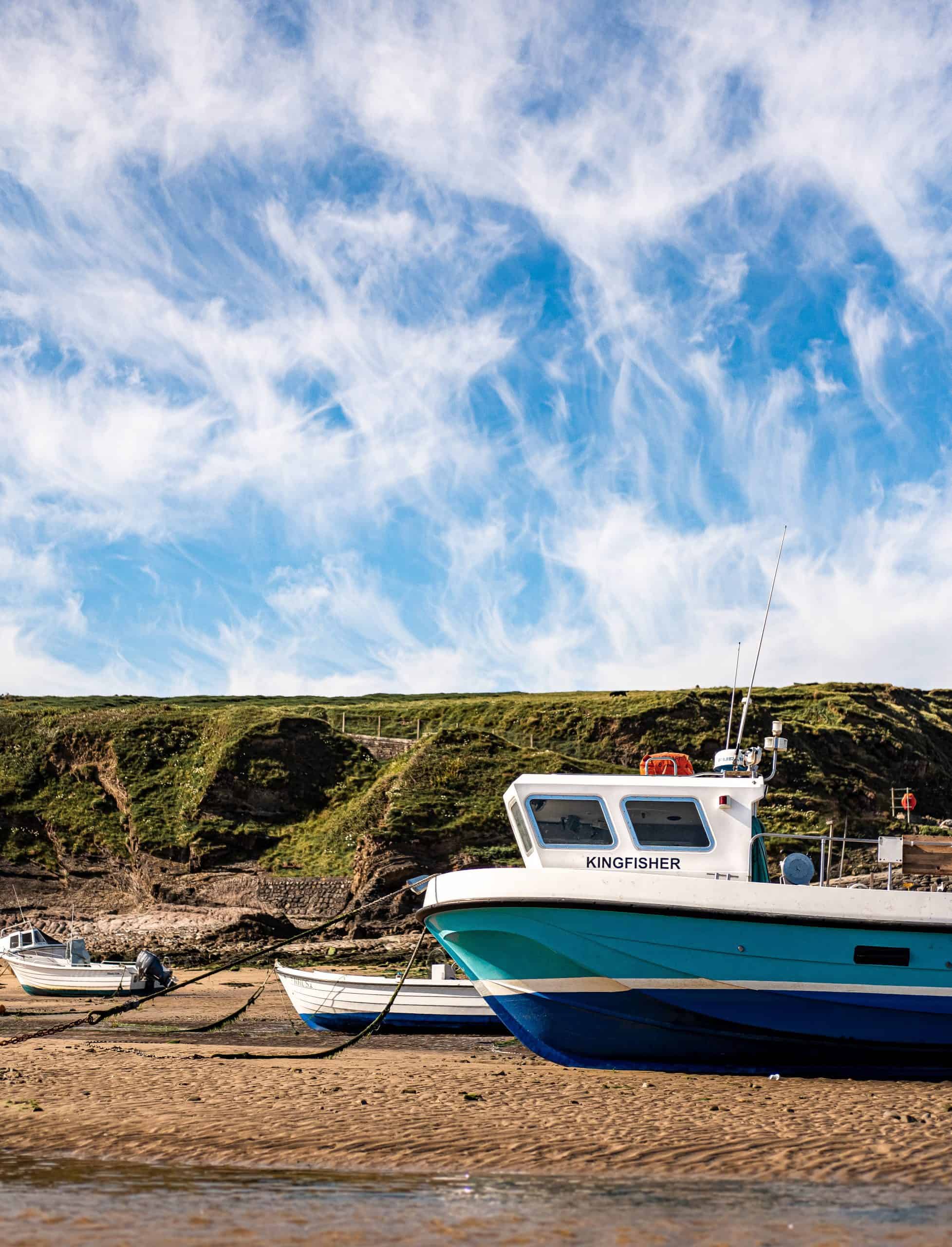 This ever popular Cornish resort (and our local town) with a laid back allure of its own is repeatedly named as the Best UK Coastal Town winning a series of Silver and Gold awards in the British Travel Awards. The town is approximately 12 miles south of Welcombe (a 25-minute pleasing drive) and hosts a variety of shops, bars and restaurants. There are a number of superb golden beaches in and around the area. Bude itself hosts Summerleaze and Crookletts, with the wonderful Widemouth 3 miles further south and Northcott, Duckpool and the enormous Sandymouth further north of Bude. 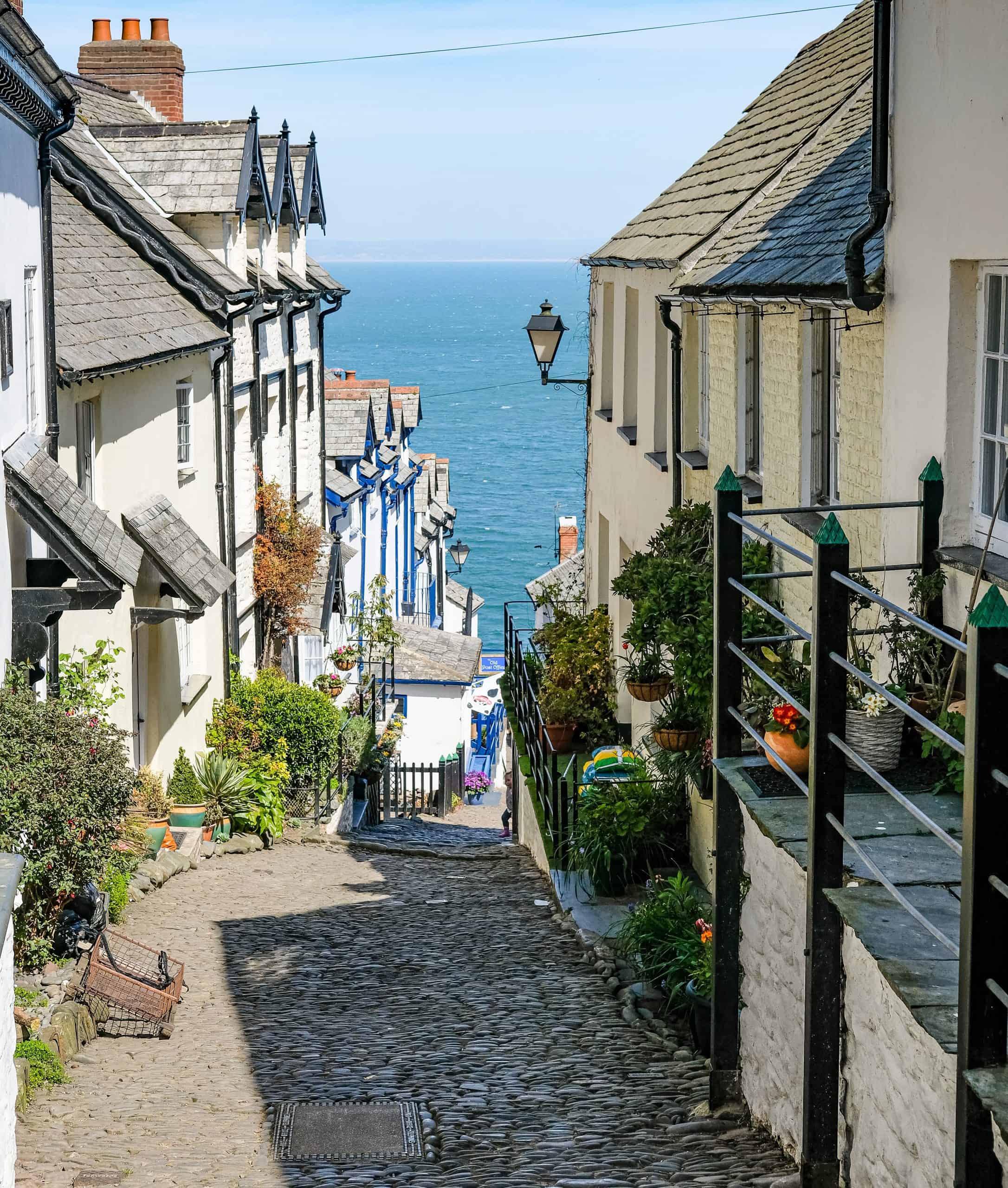 The timeless fishing village of Clovelly is a 15-minute drive north. Walk down the rather steep, cobbled street (watch out for the donkeys going back up!) with the old fishermen’s dwellings either side and views across the water all the way to the tiny and charming, working harbour. Grab a pint at the pub overlooking the harbour and perhaps try some seafood caught that morning to fuel the walk back up! 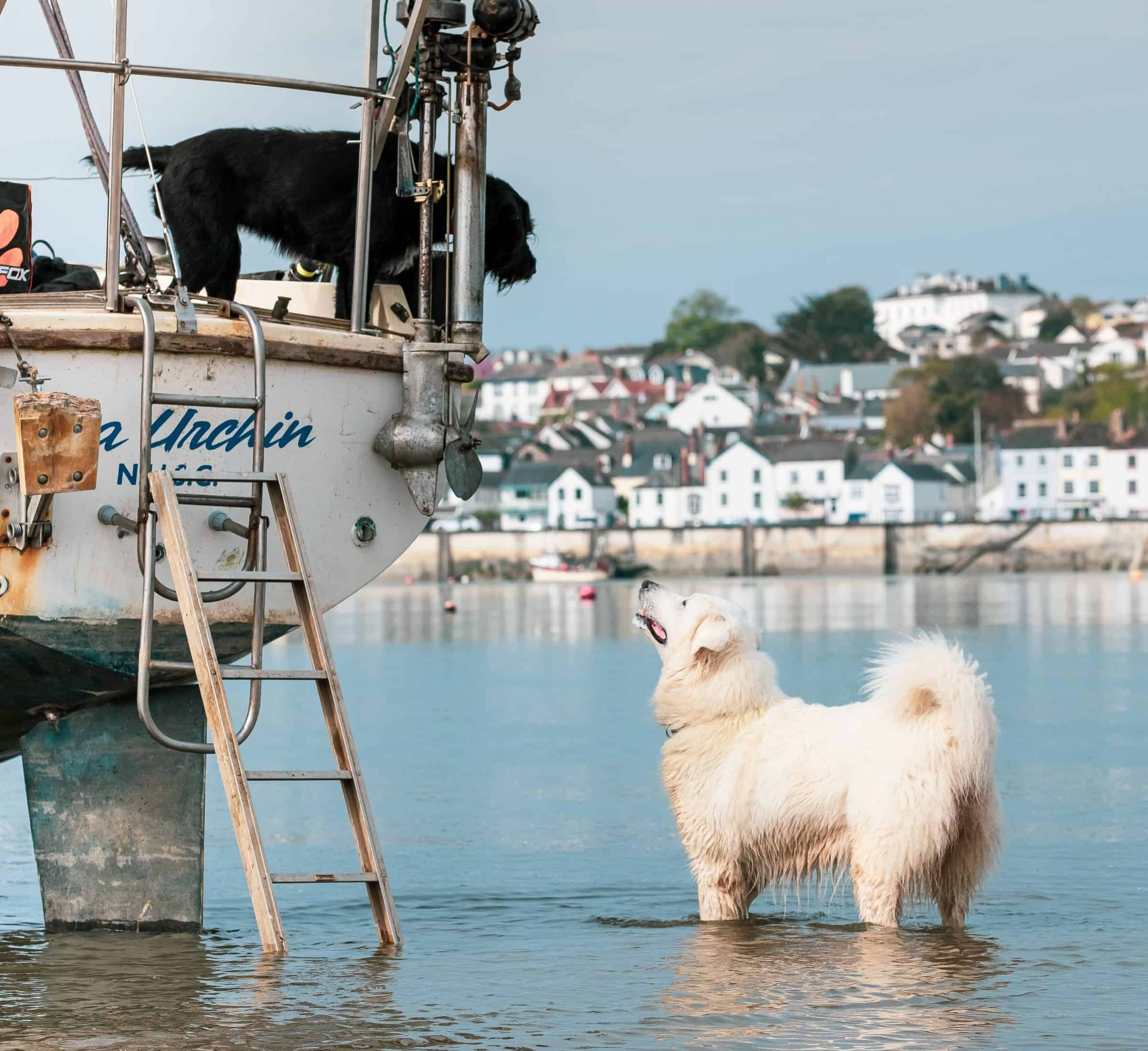 On either side of the grand estuary of the River Torridge and directly opposite each other are the popular Devonian holiday villages of Appledore and Instow. Instow is the smaller of the two, with a large sand beach which is dog-friendly all year round. Appledore is the larger with its own charms and selection of eateries. We’d recommend John’s delicatessen (one sited in both Instow and Appledore) as being particularly worth a visit, perhaps for a local crab sandwich. 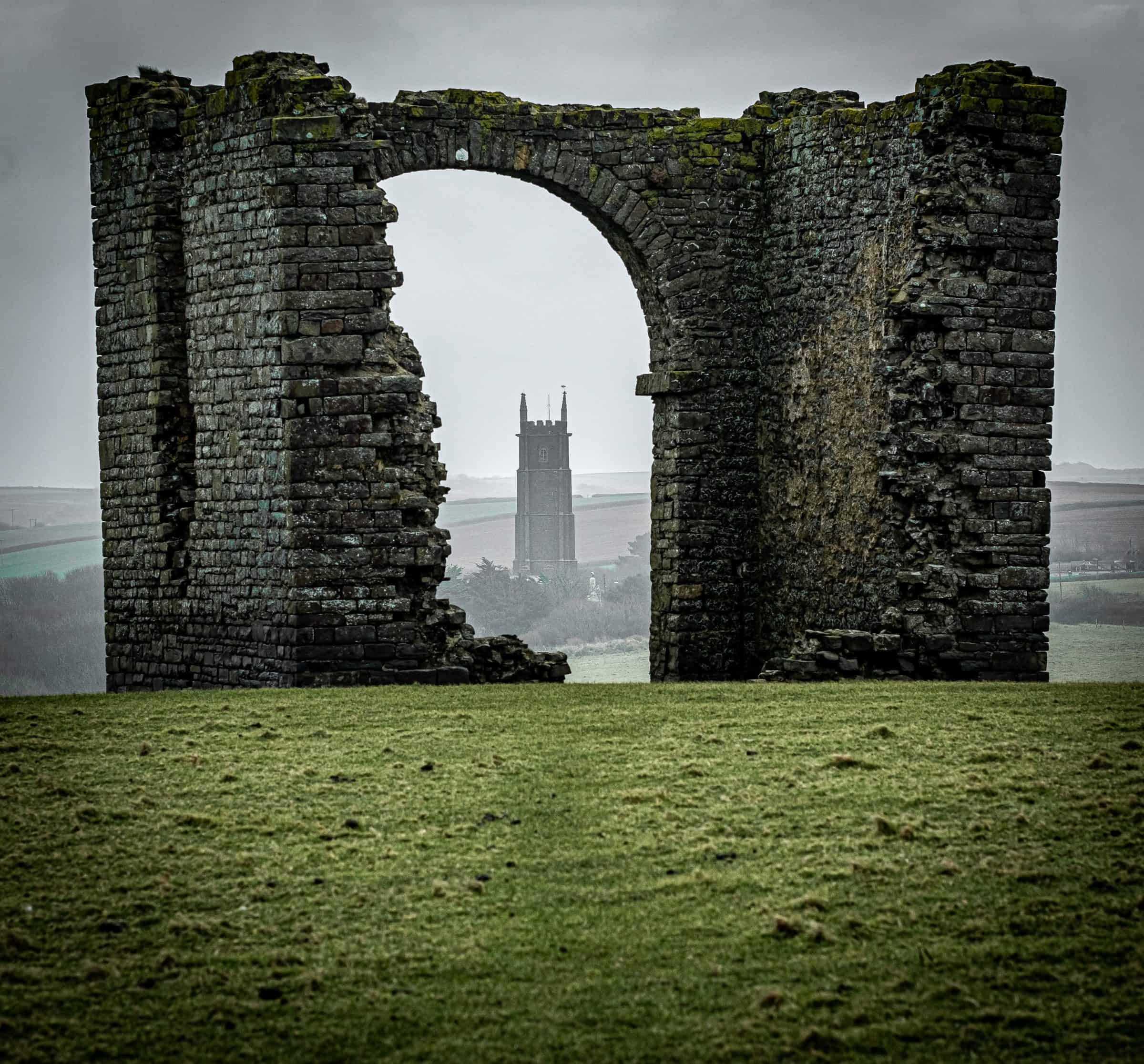 Hartland is a seven mile country drive north from us. The town is truly remote but not without charm and home to few pubs (we quite like the Hart Inn) and village shops. What might be of more interest is some of the most spectacular and wild coastline in the whole of the British Isles. The circular walk from historic Hartland Quay to Hartland Point (known to the Romans as the promontory of Hercules!) and its lighthouse before returning through the countryside is particularly rewarding. 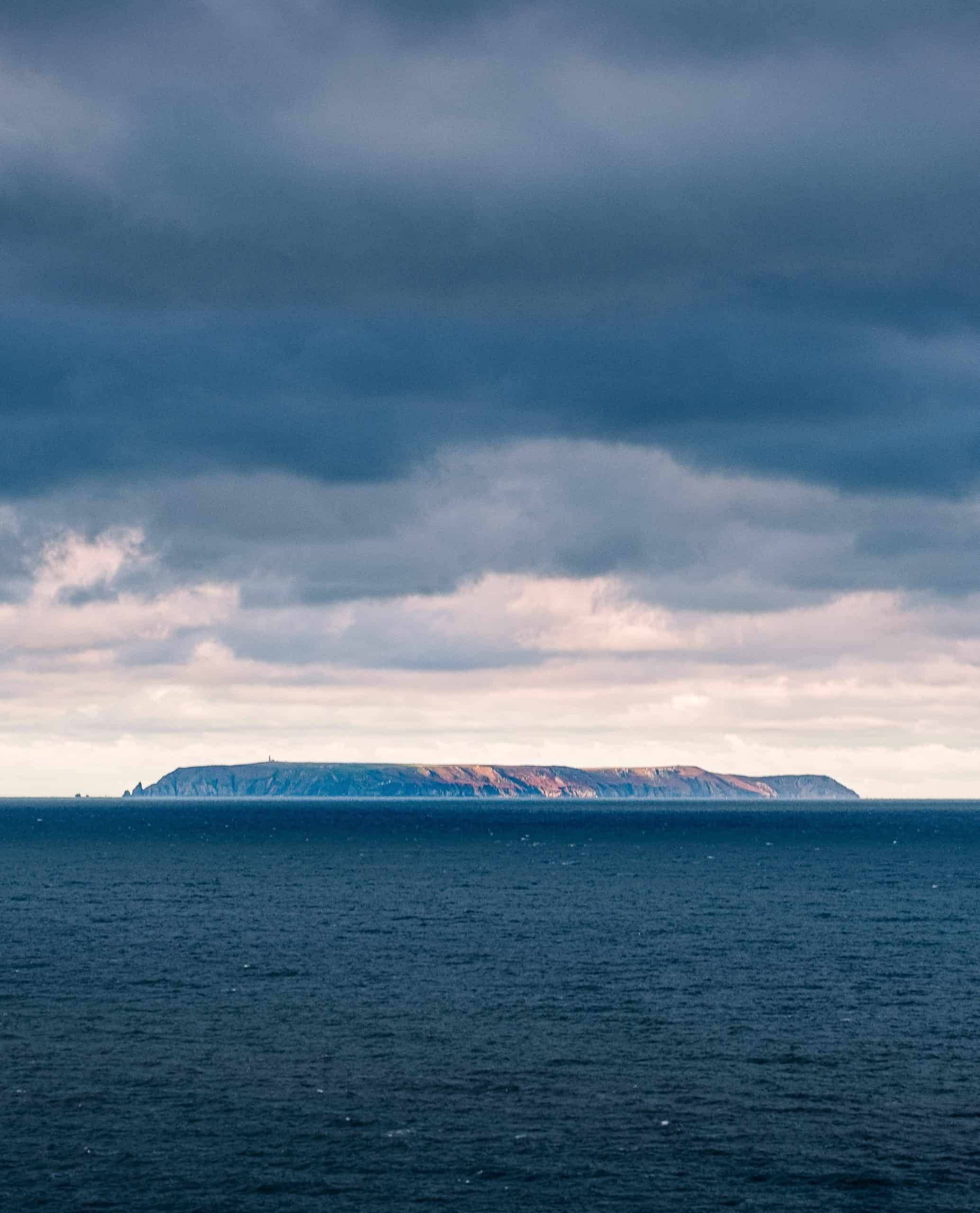 An unspoilt granite outcrop lying in the Bristol Channel. It’s three miles long by just over half a mile wide and home to just a handful of inhabitants along with about two hundred Atlantic Grey Seals. It’s history of occupation dates back over three thousand years! Notable points being; marauding Vikings taking the island in the ninth century and giving the island the name ‘Lund-ey’ (meaning Puffin island); Henry II granting the island to the Knights Templar in 1160; and in 1627 the island being occupied by the Sale Rovers (pirates from modern day Morocco). The MS Oldenburg brings day-visitors who can stay for a few hours or you could even take helicopter from Hartland Point! 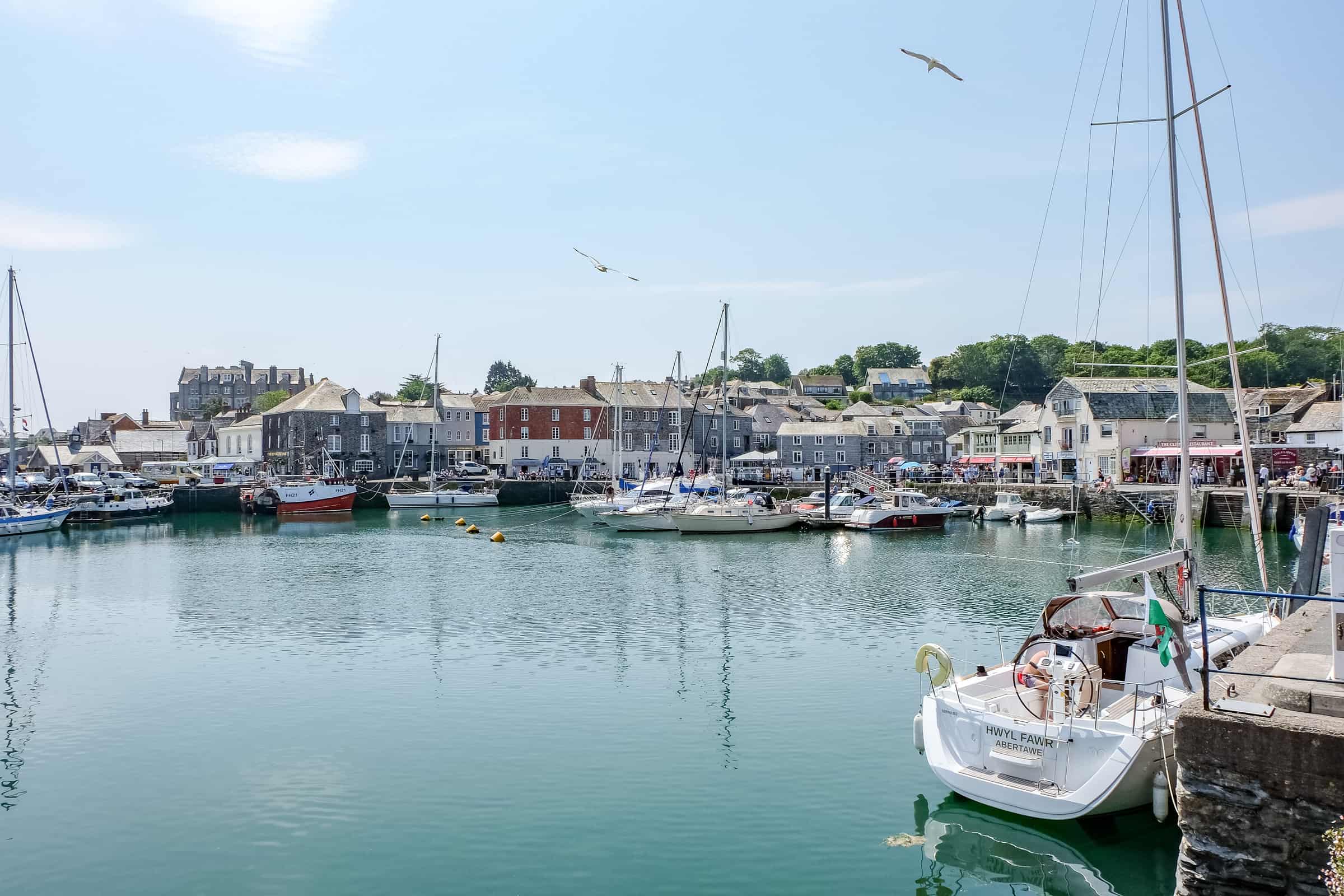 Once just a simple traditional fishing village only really known for its bizarre “Obby ‘Oss” festival (look it up!), Padstow (or Lannwedhenek as it’s known in Cornish) is now a popular tourist destination, largely thanks to the influence of restaurateur and all round good bloke – Rick Stein. The picturesque village has become rather gentrified and is now a bit of a destination for food lovers. In summer season, there’s now likely to be more yachts and pleasure boats than fishing vessels in the harbour which creates for a vibrant atmosphere. About 45 miles from Mead Barn Cottages which will take about 1h 15m in the car. 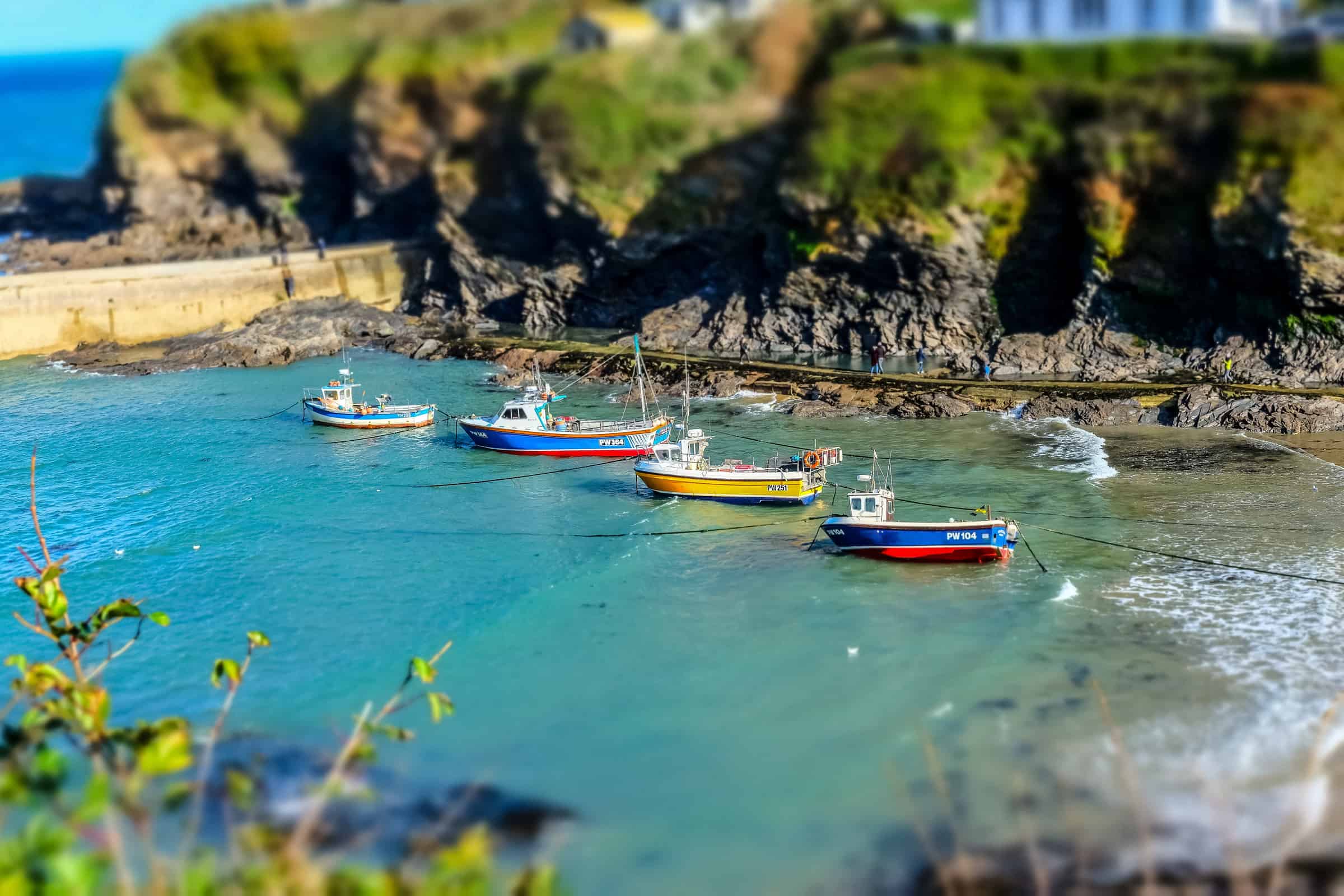 Another traditional and picturesque working fishing village on the north Cornish coast set amidst more (there’s a lot of it down in these parts) magnificent and rugged scenery. Port Isaac of course features as the village that the popular television drama ‘Doc Martin’ is filmed in. It has some lovely traditional 18th century whitewashed fishermen cottages scattered about close winding streets, some art and craft shops / galleries, a couple of pubs and can be the start point for some dramatic walks along the South West Coast Path. About an hour’s drive from Mead Barn Cottages. 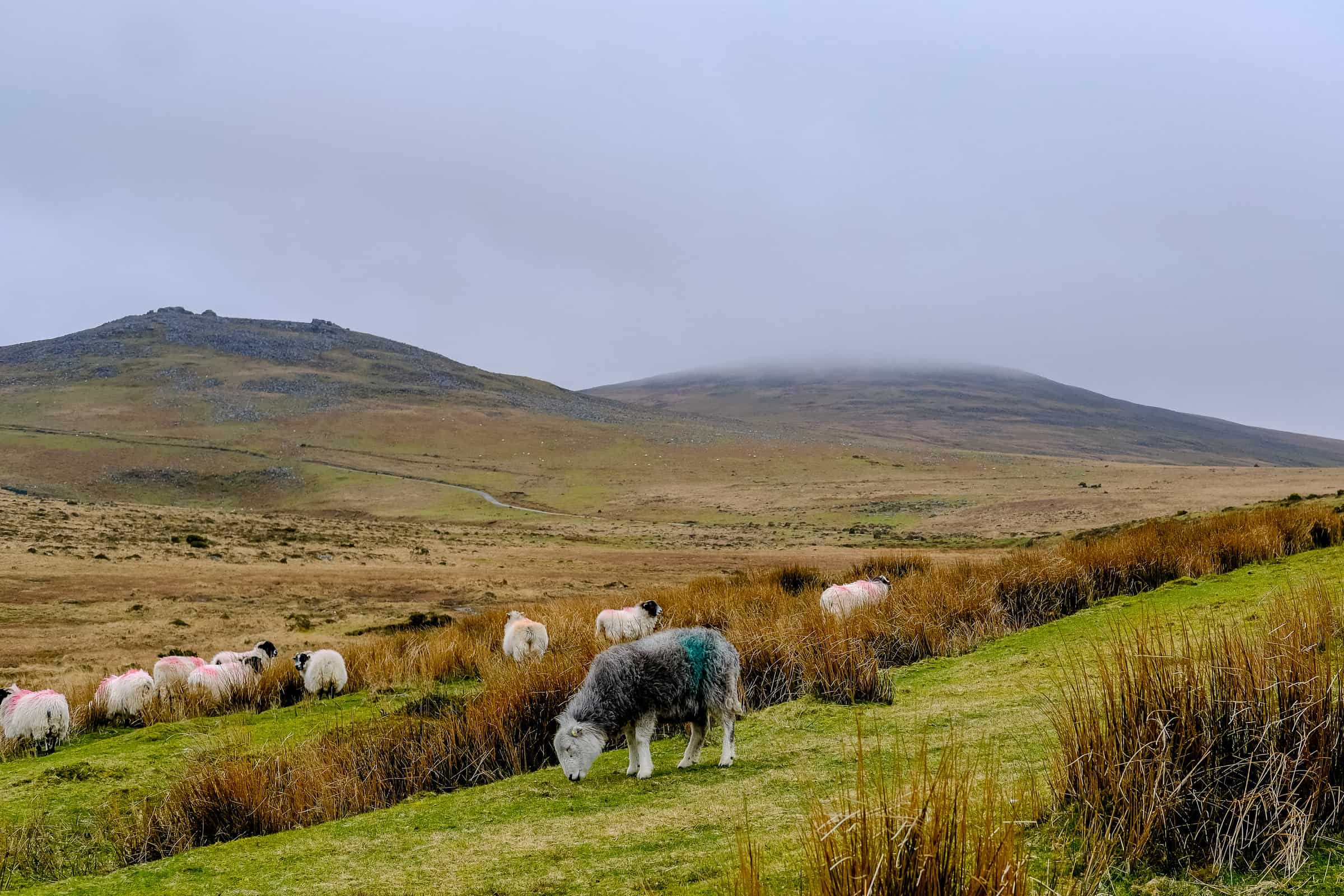 Bodmin Moor can be reached from us in about an hour. Take a walk up ‘Brown Willy’ the highest point in Cornwall, and discover the megalithic ancient monuments and stone circles, but make sure you get off the moor before dark and the Beast of Bodmin gets you! Dartmoor’s vast, wild, and ancient landscape is also within easy reach. Walk up and around High Willhays (the highest point in the National Park at 2,037 ft above sea level) marvel at the panoramic vistas and look out for the iconic Dartmoor ponies. Exmoor too makes for a wonderful day out. It is a unique and varied landscape of charming villages, moorland, woodland, farmland, valleys and coast. The Valley of the Rocks is quite a sight! 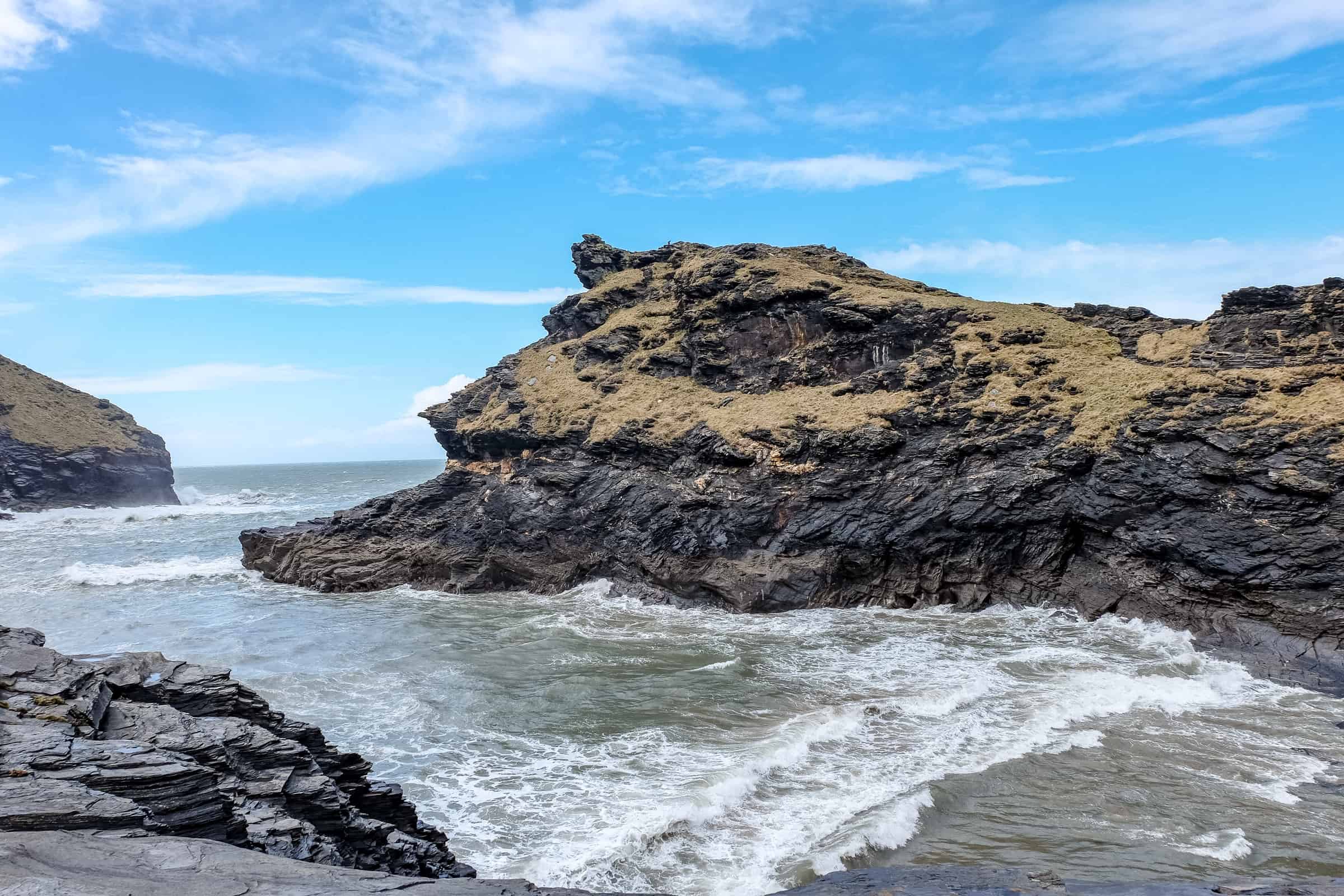 A largely unspoilt conservation area village with a dramatic natural harbour and nestled inland by some beautiful countryside where you can set off on some fantastic circular walks. The village is full of character with quaint and crooked cottages with wonky roofs, a few independent shops, a handful of pubs and eateries and even a Museum of Witchcraft (can’t comment as haven’t been!). On our last trip, we followed in the footsteps of the famous novelist Thomas Hardy by talking the path through the woods up the valley to St. Juliot’s Church and the Old Rectory where Hardy stayed and met his sweetheart Emma whilst he was an architect working on the church tower. Back to the harbour and there’s time for a fresh lobster roll and quick pint in the Cobweb Inn perhaps before heading home. 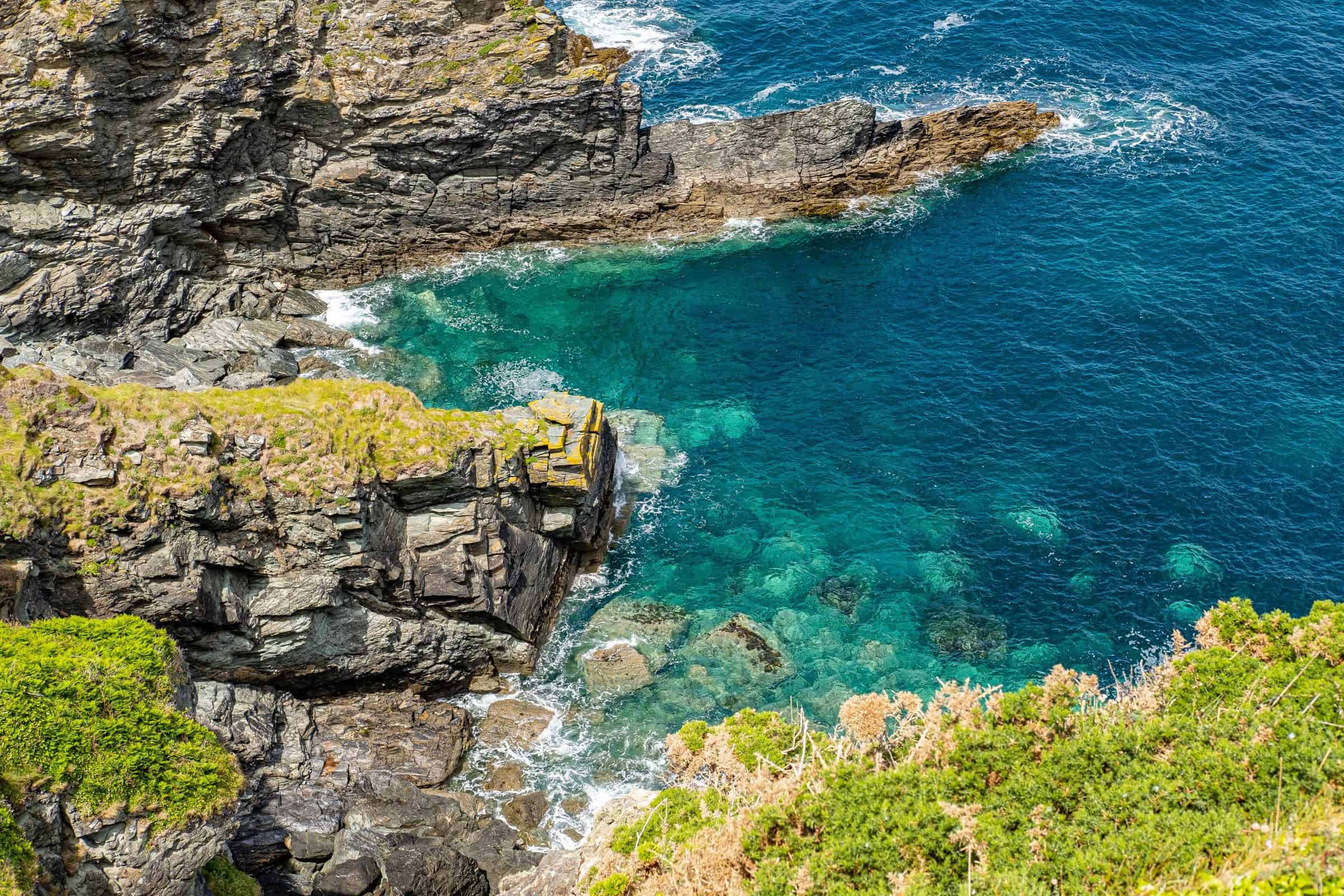 Tintagel is renowned for its myths, mysteries and association with King Arthur and the Knights of the Round Table. The iconic castle ruins are set high on this remote part of the coast and offer up some truly exceptional views. Run by English Heritage, there are actually 18 acres to explore on the island (accessed on foot over a small bridge), and when you’ve done that, you can have a swim in the ocean from its coved beach then head back into pretty Tintagel village for some refreshments. 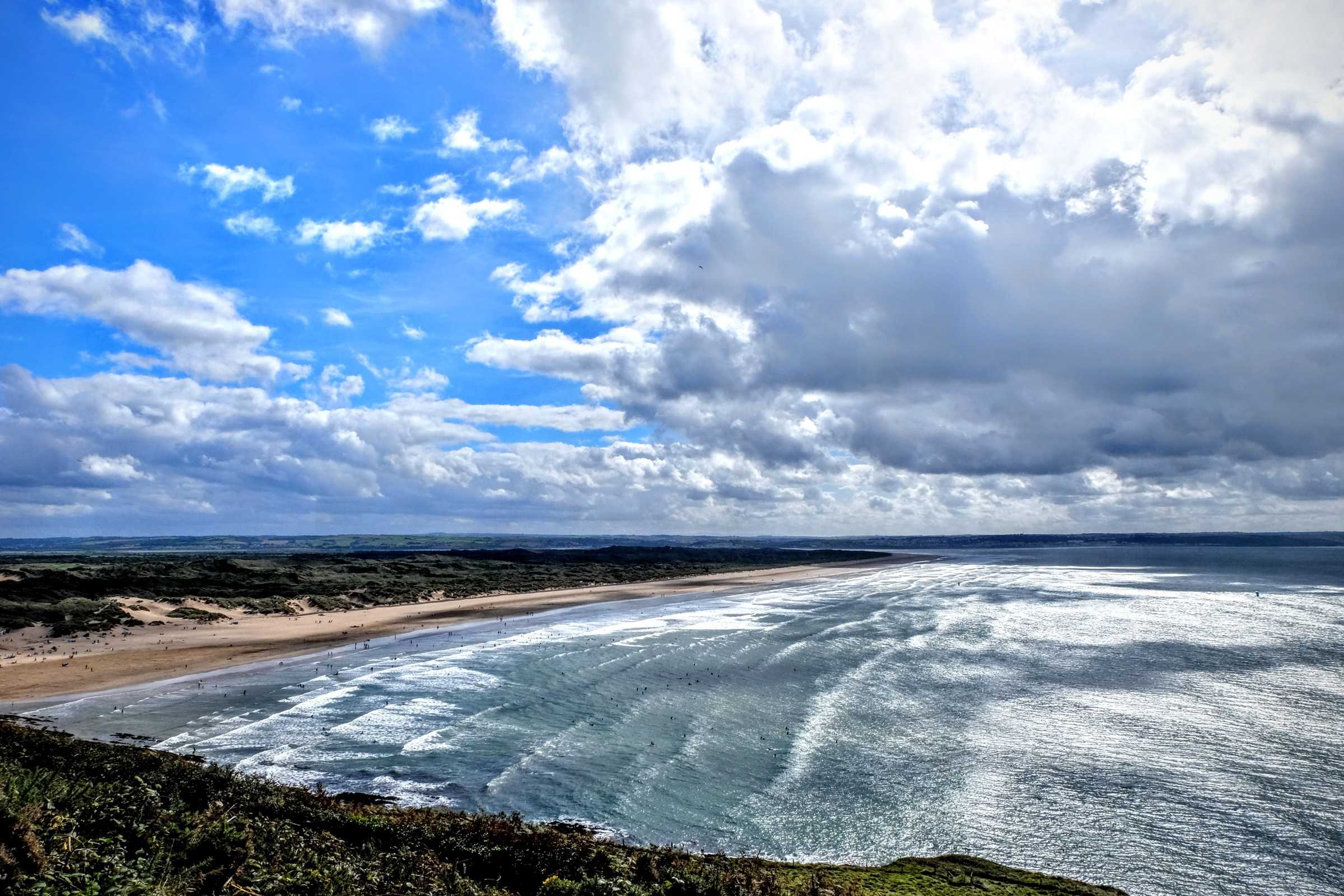 These are perhaps the most well-known and popular of North Devon’s beaches although there are many more to explore. Westward Ho’s vast 2-mile-long beach is about 30 minutes’ drive from Mead Barn Cottages. The other beaches mentioned can be reached in about an hour’s drive. Woolacombe beach was voted Number 6 in Europe and Number 20 in the World in the 2020 Tripadvisor Travellers’ Choice Awards! Saunton Sands (as here pictured) is no less shabby and interestingly (or not) was the filming location for Robbie Williams’ ‘Angels’ video. In between these two behemoths situated in a small bay lies Croyde beach rated as one of the best surfing beaches in the world.